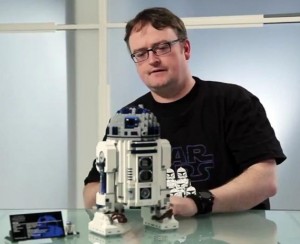 Everyone loves Lego. RD-D2 is probably one of the most lovable droids to hit the silver screen. These are both facts. Bring them both together and then you have genius!

It might not be as flashy as the Ultimate R2-D2, be controlled by your voice or a lightsabre for that matter, play Xbox 360 games or bring you a cold beer, but this is an official R2-D2 Lego kit!

Ok, so a Lego R2-D2 is nothing new – there have been quite a number of R2-D2s made from Lego over the years.

But now Lego is launching an official Star Wars R2-D2 kit which hands you everything needed to build your own Astromech droid!

The Lego R2-D2 kit comprises of around 2100 individual pieces, so patience young Padawan.