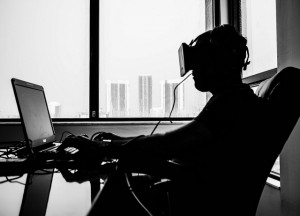 The Oculus Rift virtual reality headset has been available to developers for some time since its successful Kickstarter launch last year and in an effort to make finding compatible games for the Oculus Rift its creators have opened a new platform.

Oculus Share Share is starting out as a sharing service enabling those with a dev kit and access to explore what others are creating and to offer feedback on areas like VR comfort level and quality.

Plans are that later, likely in conjunction with the commercial release of the headset, the platform will transition into a marketplace.

To-recap the Oculus Rift devices is a next-generation virtual reality headset designed for gaming and provides gamers with an unparalleled immersive environment in which to enjoy their chosen game.

To check out the new Oculus Share platform jump over to the Oculus Rift site.

According to an official announcement, “Experimentation, iteration, and actual playtesting are at the heart of pushing virtual reality forward. One of the main goals in building Share was to help developers on all these fronts by creating a centralised community portal for Oculus content.”

“Oculus Share (or simply, Share) is the first of many steps we’re taking to build the best virtual reality platform. With Share, you can host Oculus-ready games and experiences that you’ve created, browse and download content from other developers, rate experiences on quality and VR comfort level, provide feedback to devs on what you enjoyed (and what you didn’t), and tip fellow developers for their work in cash, should you feel so inclined.”

A consumer-oriented Oculus Rift 2.0 headset is currently in development, which will be aimed at a general market and feature improved components such as enhanced head tracking, positional tracking, 1080p resolution, and wireless operation.

The Oculus Rift virtual reality head-mounted display is being developed by Oculus VR, who raised $16 million, of which $2.4 million was raised with crowd funding via Kickstarter.

Oculus VR was founded by Palmer Luckey and the co-founders of Scaleform, and id Software cofounder John Carmack was later hired as its Chief Technology Officer.

Check out the Oculus Rift with the Virtuix Omni, another KickStarter winner below.