Off Means Off to the Sony Bravia WE5 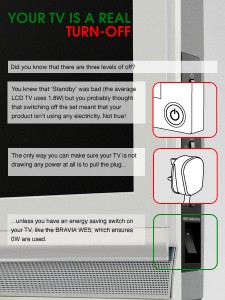 Did you think that when you turned off your tele that it was no longer using power?

Apparently some TVs still continue to draw a small amount of power when theyâ€™re plugged in but switched off; itâ€™s a popular misconception, but off doesnâ€™t always mean off.

Well, those boffins at Sony have created the aptly titled ‘Energy Saving Switch’ and whacked it in to goggleboxes such as the BRAVIA WE5.

This ensures that the TV draws no power at all when itâ€™s switched off but can remain plugged in at the wall – that means you don’t have to scrabble behind the box just make sure it isn’t sipping on juice.

Don’t worry though; it’ll still save all of your settings and restores the TV to its original state when itâ€™s switched back on.

Nice and green don’t you think?