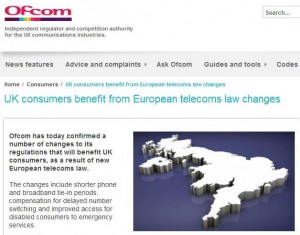 Good ol’ Ofcom has just introduced three regulations which should help UK mobile phone users. These include banning contracts that last longer than 24 months, making keeping your mobile number easier and the introduction of an emergency text service.

The telecoms regulator has struck at what could have been an inevitable development with mobile phone and broadband providers – the implementation of 36 month contracts. Ok, so as far as I know there’s only an 36 month contract available through Orange – this doesn’t mean that other operators weren’t licking their lips in anticipation of getting someone locked into a 3 year deal!

Through the ruling no operator will able to offer contracts longer than 24 months. On the back of this consumers must also be offered a choice of 12-month contracts.

A lot of the time the 12 and 18 month contracts work out better financially in the long run – it tends to be the steep one off price of the handset that push people to 24 month deals and, in these times of the Crunch I could see the tech-hungry wanting a new hit of geekahol staring at the possibility of a 36 month tie-in just to get that of the moment blower.

There’s no point in building up a social network if your number is going to change as often as your handset and keeping your number should be really easy. The fact of the matter is that you’re generally given a temporary number and it can take days for the switch to happen. Ofcom tell us that this will be a thing of the past. From here on in networks must port a customer number to a new provider within one business day.

Failure to do this will require the provider to pay ‘reasonable compensation’ to the customer. Individual companies can set up their own compensation schemes, with Ofcom reviewing them in 12 months’ time.

Apparently this has been in effect for over a month for individual numbers, but this ruling has been extended to include businesses that want to switch over a set of numbers in one go.

Ofcom’s emergency SMS scheme will let registered users (those with hearing or speech impairments mainly) to be able to sling out a text instead of calling 999. The scheme has been running on a voluntary basis since 2009 and there are some 14,500 registered users in the UK.

Although these all seem minor improvements I reckon that the new rulings should make mobile ownership a little more friendly and less gnarly.