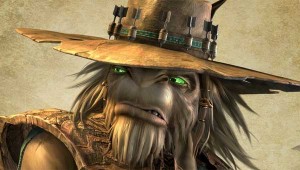 Stranger’s Wrath was originally released in 2005 on the Xbox and is now available on the PlayStation Store. After the first play it’s time to take a more in-depth look at Stranger on the 5-inch OLED screen…

After an Ice Age type intro which shows off incredible detail and colour, your character ‘Stranger’ is ready to head butt and bounty hunt his way around this beautiful platform game.

Straight off it feels like a fully priced game, bright stunning graphics with an eerie sound track with a touchscreen menu. I think we’re in for something good here.

You play as Stranger who’s a humorous and laid back bounty hunter in a quest to pursue and capture outlaws in return for moolah. Sound fun? Well it is.

The game is like being in a Spaghetti Western, but instead of firing live rounds, Stranger fires small living creature’s like chippunks and zap flies from his arm-mounted crossbow. He can also perform a rather impressive head butt and a stylish spin attack which both come in very handy throughout the game.

A double tap on the screen changes between third and first person mode which works really well on the Vita.

You’re not told until later in the game why Stranger needs to collect a high bounty stash, you’ll find out later but you will need 20,000 bucks.

The game never gets stale or repetitive as you explore different landscapes and meet different challenges.

With a fun and cheesy dialogue this game is really unique and one to definitely own.

There are 37 Trophies including a Platinum to bag and it is only £7.49 to PlayStation Plus members.

I absolutely love this game.