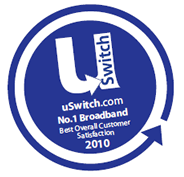 O2 have scored highest in a survey of 7,500 UK broadband users conducted by comparison website uSwitch – leaving the old guard failing to keep up.

O2 took the number one spot in all but one category winning titles of best value for money, best connection quality, customer service and best technical support.

92% of O2 customers were satisfied with their service.

Other providers that will be happy to read the survey’s results are Plusnet and Sky whereas the walk of shame is given to some of the more established names of AOL, Orange and BT.

O2 was given gold stars by uSwitch for its phone line speed checks and free UK-based 24/7 customer service. O2 got more than a quarter of a million new customers to sign on the dotted line and now has around 600,000 mainly happy subscribers.

uSwitch says that the average annual broadband bill is now Â£10 cheaper than last year at Â£167 and overall broadband satisfaction has risen 2% to 79%.

The scary number is that we are collectively spending almost Â£3bn a year on broadband – but only six in 10 are fully satisfied with the customer service received from ISP.

Who are you with? Are you happy?

I’m with Virgin who scored a couple of second places for speed and quality of connection.