O2 is Best UK Mobile Operator (again) – Where Does Your Network Come? 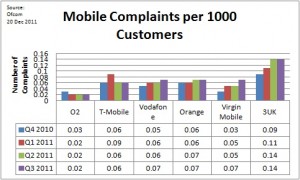 If you are an O2 user then it’s once again time to engage ‘Smug Mode’ as Ofcom has rated it the least annoying phone company in the UK. Want to know which service providers got most complaints? Read on…

I have to admit to not ever having reason to complain about O2’s service (I’ve been with them since they were BT Cellnet!) and this seems to be the same for most of its users.

Unfortunately, the same cannot be said for those grumblechops who have contracts with TalkTalk and Three.

The report is based on the number of people complaining to telecoms regulator Ofcom, rather than to the ISPs and phone networks themselves.

I have to point out that TalkTalk has managed to reduce the number of complaints they’re getting in the last 6 months but that hasn’t prevented them being dubbed as the most moaned-about ISP this year.

In the mobile phone charts it is Three that drew the most anger from users again with 0.14 complaints per 1,000 mobile phone customers. It seems that even offering unlimited data isn’t enough to combat the complaints.

Even though 3UK (Three) received at least twice as many complaints as its mobile network rivals – and seven times as many as leader O2 – the silver-cloud is that the operator still received fewer complaints per 1,000 customers compared to any fixed-line provider.

According to Ofcom – “Complaints against 3UK have been largely driven by complaints relating to disputed charges and customer service issues,”

A spokesperson for Three has stated that “We have improved the way we handle complaints over the past few months and saw a significant reduction in complaints in the early part of the summer, so it is disappointing to see these results” and went on to say “We will work with Ofcom to better understand the nature of the complaints. Customer service remains a focus for the business”

Has your ISP or phone network been a saint or a sinner this year? Are you with Three and feel that you ought to defend its honour? I have to say that I’ve tested handsets using Three’s network and have found it fine – but I haven’t had to try their customer service or billing process.