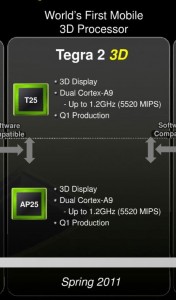 OK – slight re-think after my news that a quad-core NVIDIA Tegra 3 would appear.

It seems that everything is pointing towards a Tegra 2 3D processor being the new chip due to appear at Mobile World Congress.

Rather than following the use of a parallax barrier like the Nintendo 3DS – the Tegra 2 3D chip will be shoved into devices sporting a Master Image TN-LCD display which uses individual cells to create a 3D effect.

We’ll all have to wait til the end of the year for the quad-cores (see gallery below).

So – a load of 3D devices arriving soon. Are you excited by this prospect or, like me, would rather have seen the quad-core coming to mobiles?