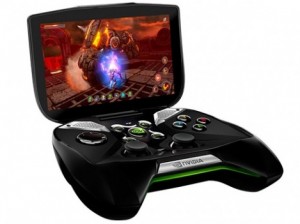 The feature in question is that it will allow owners to operate their handheld consoles through their televisions and play a wider variety of Android games that do not support controllers.

For Shield owners this a sweet update that adds a lot of worthwhile functionality. For Nvidia it’s reaffirmation that this is a real platform and not just a demonstration device designed to entice OEMs.

The Nvidia Shield, for those of you that are unaware, combines a full-sized game controller with 5-inch display into a handheld device and it received an upgrade this morning.

Nvidia has just unveiled Shield’s new Console Mode, which lets gamers plug the handheld into their televisions with an HDMI-out cable. The Shield can then act as a game console, responding to a Bluetooth controller to play Android games and watch movies. It also works with the Shield’s PC streaming technology to stream games from a compatible computer to the TV at 720p.

Along with the above, this update also adds the official, non-beta release of Shield’s Gamestream PC gameplay streaming service, which plugs into Steam to let users play full PC games on their device streaming at up to 60fps over a local Wi-Fi network.

Plus, you can shift full app and game files from the local storage to an external micro SD card, which clears up space, and the Home button now provides access to both recently opened apps and Google Now.

The other fresh feature is GamePad Mapper, which unlocks thousands of other Android games to controller play. Players can create a profile for each game that maps virtual joysticks, buttons and gestures to the Shield’s physical controls, for games such as Angry Birds and Jetpack Joyride. They can share these control schemes with their friends or download ones Nvidia created.

Nvidia Shield owners can download the update now. The company is also offering a rebate program through the holidays to lure in new customers. Those who purchase certain Nvidia GTX graphics card will receive a $100 discount on a Shield, plus free copies of Assassin’s Creed IV: Black Flag, Splinter Cell: Blacklist and Batman: Arkham Origins.