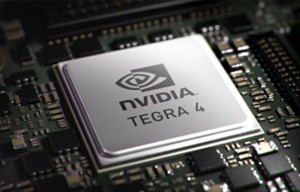 Building on the succes of their Tegra 3 processor, NVIDIA has announced what they are calling the worlds fastest mobile processor, the NVIDIA Tegra 4.

NVIDIA  states that the Tegra 4 features 72 custom NVIDIA GeForce GPU cores, which deliver six times the GPU power of the Tegra 3 and takes full advantage of all those high res screens out there.

There’s also a 2.6x boost to browsing speeds as well as LTE support.

The Tegra 4 also has automatic support for HDR photos and video whilst being less of a drain on your device’s battery. NVIDIA claims that the new processor consumes up to 45% less power than the Tegra 3 “in common cases”. The Tegra 4 supports up to 14 hours of HD video playback on a smartphone!

You can find out more details about the NVIDIA Tegra 4 processor over at their website, there are no details as yet on when we will see the first Tegra 4 powered devices.

Tegra 4 also enables worldwide 4G LTE voice and data support through an optional chipset, the fifth-generation NVIDIA Icera® i500 processor. More efficient and 40 percent the size of conventional modems, i500 delivers four times the processing capability of its predecessor.

“Tegra 4 provides enormous processing power and efficiency to power smartphones and tablets, gaming devices, auto systems and PCs,” said Phil Carmack, senior vice president of the Tegra business at NVIDIA. ”Its new capabilities, particularly in the area of computational photography, will help improve a whole range of existing products and lead to the creation of exciting new ones.”

Among the Tegra 4 processor’s breakthroughs is its Computational Photography Architecture, which automatically delivers high dynamic range (HDR) photos and video by fusing together the processing power of the GPU, CPU and the camera’s image-signal processor.

Its HDR capability captures images, including those taken with a flash, the way they are seen by the human eye – with detail in both bright and dark areas.

Tegra 4 consumes up to 45 percent less power than its predecessor, Tegra 3, in common use cases. And it enables up to 14 hours of HD video playback on phones.