Nuance Dragon Dictate 2.5 for Mac – Control your Mac and Write Articles by Talking into your iPhone 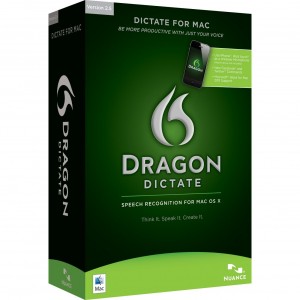 Version 2.5 hands users the power of voice commands and dictation in Microsoft Word 2011 and the ability to easily switch between voice and keyboard input at will, or between dictation and command mode within Dictate itself. This lends itself to a far more natural and workflow-friendly way of using Dragon.

Dragon Dictate for Mac 2.5 adds the ability to dictate without distraction from the mouse and keyboard, and also adds a microphone option in the form of the Dragon Remote Microphone app (Free download). This means that you can use your iPhone as the mic and pace up and down whilst dictating your letter or piece of work.

Just tap a button on your iPhone, start talking, and see the words appear on your Mac. It’s all connected via Wi-Fi and so is a lot more reliable than hooking up through Bluetooth.

There are new capabilities for controlling how Dragon Dictate formats text; new voice commands even allow posting to Facebook and Twitter 🙂

You can search Google, Bing, Yahoo! or with Spotlight on the Mac just by talking into your iPhone! The microphone can be set to automatically “sleep” after a preset amount of time so that it won’t recognise speech until you specifically wake it again.

Naturally it will work with Apple favourites such as including Mail, iChat, TextEdit, Pages, Safari and many more.