Now TV – makes your telly smart for a tenner 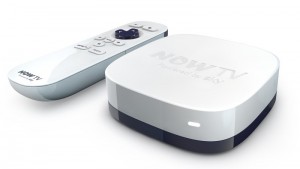 Want to make your TV cleverer? Fancy piping the latest series of your favourite show onto your TV through BBC iPlayer but don’t have a smart TV? Sky’s new NOW TV box will do all that, with no subscription – just a tenner up front.

The box both looks and acts a bit like the Apple TV but is, in fact, a Roku RT in everything except colour scheme, name and price (the Roku unit costs £50).

Simply plug it into your telly over HDMI, connect it up to the internet, and it’ll give you access to iPlayer, the BBC News app, Demand 5, and Sky News. Not bad for a one off payment of ten UK pounds.

The box comes courtesy of Sky who obviously are looking to entice you in with the nicely priced package and then tease you with its six Sky Sports channels which are available through the box – you can get all the ball-kicking, wheel-turning action you could possibly want for £9.99 per day. I guess that’s not so bad if you just want to catch a final or something.

Sky Movies is on board as you’d expect but, in order to enjoy these, guess what? More dipping in to your bank account. The Sky Movies Pass costs £8.99 per month for the first three months then £15 per month after that. There’s no contract though so you can duck out at any time, and Sky says that it has new movies 12 months ahead of Netflix and Lovefilm. 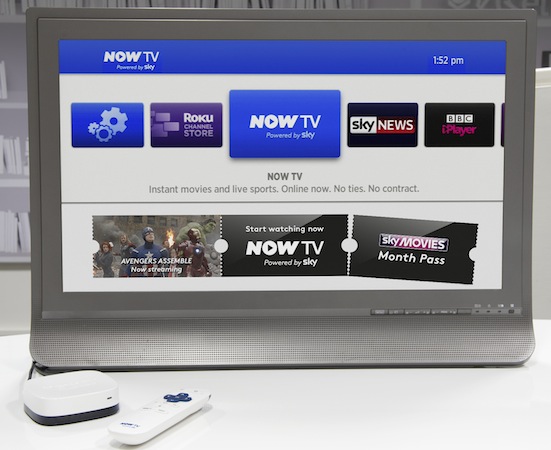 But the real beauty of the rebranded Roku LT is that it doesn’t demand you to pay any monthly sub to get those aforementioned channels at all and you also get access to Flickr, Facebook and Spotify right there on your gogglebox.

Granted, the Now TV box is more than the £5.99 for a month of Netflix or £4.99 for amonth of LoveFilm if you want constant access to films but, you do get much earlier access to a better roster of movies. Add to that the unmatched sports coverage of Sky – it starts to look quite compelling.

The box supports 720p via its HDMI port, and all streaming is via 802.11n Wi-Fi as there’s no built-in Ethernet.

It would be interesting to see how easy it would be to hack the Sky Now TV unit and unlock the Roku from within.

For more official info head over to the Now TV website.