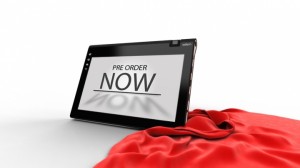 The Adam Notion Ink Tablet PC has long lived in the vaporware area of iPad Killers. Â It looks great and the demos at January’s CES was fairly impressive but that was almost a year ago!

Well, this is about to change as it is now up for preorder and will be loaded with AndroidÂ 2.3, also known as Gingerbread, and may even end up running 3.0, or Honeycomb.

Why not stick with the Android 2.2 it was slated to arrive with? Â Well, according to the company’s blog post the OS update should hand the tablet:

I’m liking the sound of the “transflective” displays that some of these tablets will be available with. Â The clever screen has two modes, full color and e-ink, that users can switch between by pushing a button. Â This should save battery power when reading eBooks and, with a button press, flick over to glorious colour for web browsing and vid watching 🙂

Still no word on shipping but the fact that the preorders are open should mean that these should start appearing in the really real word soon!