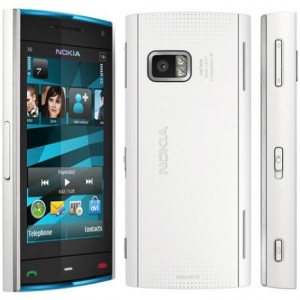 It had been whispered that the Nokia X6 music phone would see the shelves this year but now it seems there’s a fairly fixed date.

Word comes from the official Nokia blog Nokia Conversations – apparently the touchscreen looker will be made available globally on 16 November.

This date has been planned to cunningly coincide with Rihanna-ah-ah-eh-eh’s live concert that happens to be streamed online at Nokia.com on that very date.

The X6 seems to be positioned as Nokia’s flagship music handheld and is Nokia’s fifth proper touch phone.

It packs 36GB of memory out the box (32GB internal, 4GB on a microSD card), runs on the S60 5th edition OS and, for me, is probably one of the nicest looking Noks for a long time.

Look at it. Go on! Those chiseled lines and that lovely chrome rim.

The new 3.2 inch capacitive screen, the first on a touchscreen phone from Nokia, seems better than previous resistive options from Nokia.

The camera is another from Carl Zeiss and is a 5MP sensor hooked-up with a dual LED flash – oddly it doesn’t have a protective cover so keep in a separate pocket to your change and keys.

So – preorder now from the likes of Play.com or hang-on til the 16th 🙂