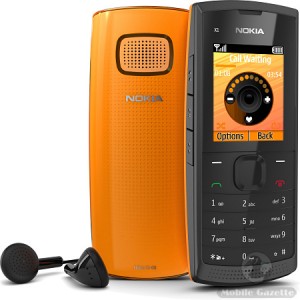 It’s all very well swanning around with that smartphone but how often does it need charging?

Nokia has just announced the new X1-00 entry-entry-level phone that could well help them shift a whole heap of Symbian phones before they pull the plug on the OS and move over to WinPho7.

The Nokia X1-00 will cost less than 35 euros and, according to Nokia, will offer:

That means you get a speaker designed to be heard in a busy market or factory – up to 106 phon which is ‘discotheque level’ apparently.

With the X1-00 you get a built in FM radio for listening to Glastonbury news, a torch so you can see who’s tent you’re sneaking out of, and a microSD card to save up to 16GB of your junk on.

But the real impressive thing is its very large 1320 mAH battery. This beast will keep the X1-00 running for 61 days!

That equates to 13 hours talktime, or up to 38 hours of music playback. If that sounds like high-end performance then you’d be right. The very same BL-5J cell is used in the Nokia N900 and Nokia X6.

You also get the joys of the Series 30 operating system, a music player app, calendar, clock and calculator, pre-loaded games and 5 phone books.

You can go get it in April and feel all smug that you wont have to charge it again til the end of June.

That battery life and speakers have got to make the X1-00 the must-have for the festival season!