Nokia World to Bring “Something Amazing” According to Flagship Store 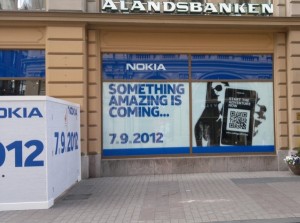 Over at Nokia’s flagship Helsinki store posters proudly boasting that “Something Amazing is coming… 7.9.2012” – what on earth could that be?

Nokia is obviously building up to something and with Nokia World taking place on September 5th and 6th the amazing item seems to be ready to buy soon after.

I would hazard a guess that Nok will be showing off a Windows Phone 8 device but then, following Nokia’s Q2 financial results, word on the streets is that they may want to edge their bets and open their mobiles to another platform – could this something be an Android-powered Nokia?

If the Finnish phone floggers decide to release a Windows Phone 8 device it’s likely to be met with mixed feelings from Nokia customers.

There will be those that are primed for an upgrade and will be cock-a-hoop at getting the latest Microsoft operating system on their blower, however, there will be the other camp who spent their hard-earned for one of the recent Lumias only to be told that they won’t be able to upgrade their phones to Windows Phone 8. Ouch!

It could well be that WinPho 8 tablet that was mentioned earlier this year, or even the Windows Phone PureView phone camera that is supposed to be coming “very soon“.

Perhaps the timing is just a huge coincidence and that the Helsinki store might just be getting a new lick of paint.