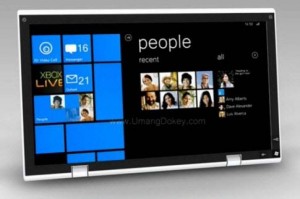 Nokia could be preparing a 10-inch Windows 8 tablet in a drive to be different.

Nokia is continuing with its Windows love-in and word on the web is that they’re not that far away from releasing a tablet which will be packing the poke and swipe-friendly Windows 8 as its OS of choice.

The tablet will push along thanks to a “dual-core platform” from Qualcomm (so presumably the S4) and the first batch of 200,00 could land “in the fourth quarter of 2012” from Compal Electronics.

Niklas Savander, an executive vice-president at Nokia, has already stated that producing a tablet could be on the horizon for Nok: “The tablet is an interesting market for someone like Nokia because it is not cannibalising handset sales, it is cannibalising PC sales.”

Savander did point out that if Nokia were going to move forward in to the tablet arena they would have to do something different in order to make any impression.

“If we are going to be in that market we need to have a different point of view, because being the 101st maker isn’t really a commercial or consumer proposition,”

There is no word on screen resolution, but it is safe to assume that Nokia will have to go for a high-res screen if it is to stand a chance against Apple’s new iPad.

This could be just another rumour or a plan that is more than a year ahead of us seeing anything – but, with Savander mentioning that tablets are nibbling into PC, rather than smartphone, sales Windows 8 would fit in to these plans. Add to that Win 8’s touchscreen skills then the rumours do make sense.

But then, that’s why rumours spread isn’t it?

I think that a Nok Tab would be well bolted together with some nice, understated styling and if it was priced right, it could be a hit.

It could well do battle against the iPad, especially if it joined forces with Google Android Jellybean as previously mentioned.

What do you reckon – would you buy a Windows 8 tablet from Nokia?