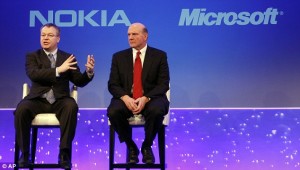 It has finally happened. After Microsoft bought Skype but failed to acquire Nokia, an agreement has now been made and so marks the end of Nokia. Needless to say, Nokia staff have been quite emotional.

Microsoft are set to pay 3.79 billion Euros for Nokia’s business, plus another 1.65 billion Euros for its portfolio of patents with 32,000 people expected to transfer from Nokia to Microsoft, including 18,300 that are “directly involved in manufacturing.”

Under the terms of Microsoft’s $7.2 billion acquisition of Nokia’s devices and services division, the “Asha” and “Lumia” trademarks will transfer to Redmond, but the “Nokia” mark will remain property of the Finnish company, and may only be used on featurephones under a 10-year license agreement.

That means any future Windows Phones built by the newest division of Microsoft will be Microsoft-branded — and, at that, Nokia has said its goodbyes to a smartphone market it once helped to create.

Microsoft CEO Steve Ballmer has called this as “a bold step into the future.”

In an email, Ballmer cited the Lumia 1020 as an example of what the companies could do together, but said the phone hadn’t caused the marketshare bump it deserved. “Now is the time to build on this momentum and accelerate our share and profits in phones,”

Within moments of Microsoft’s announcement Twitter has seen an outpouring of reactions from Nokia employees as, even though Microsoft has committed to keep the base of its phone operations in Finland, it has also said that it plans to cut $600 million annually in costs within the first 18 months after the merger. Needless to say, Nokians are a bit nervy.

While John Kneeland, a developer project manager at Nokia, points out what an emotional time it is for everyone at the company.

As someone that has not only faced the threat of redundancy but has been made redundant with a matter of hours notice – I can empathise with what the current feelings must be around the Nokia camp.

John Kneeland’s later tweets kinda put a voice to what most must be thinking. 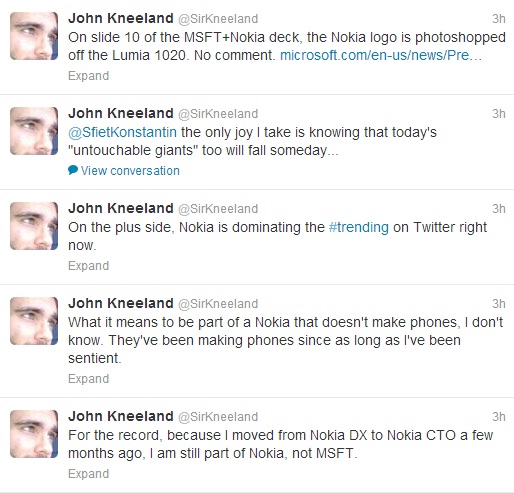 It must be noted that amongst all of the cold business chat and employer uncertainty that comes with any huge change, there is a great deal of pride being shown by the Nokia staff – and rightly so.

I’ve owned and used Nokias for quite a while and my N95 became the benchmark for any phone I bought after it. I even have a Nokia PureView 808, which has since been killed off. It is wrong that there will never be another smartphone bearing the name, Nokia should be remembered for being the name in cutting edge mobile technology.

It is a sad time and definitely the end of an era. I hope that everyone at Nokia goes on to where they want to be.