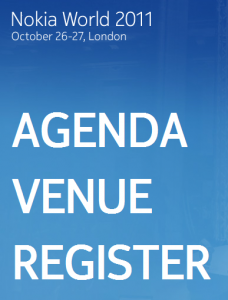 OK, so seeing Stephen Elop slip out the Nokia Sea Ray Windows Phone may have been more a ‘leak’ than a leak but how about a UK launch date? It just so happens I know….

Even though the first Windows Phone-powered Nok isn’t slated to ship in any quantities til next year Elop has been quoted as having â€œincreased confidence that we will launch our first device based on the Windows platform later this year.â€

Most of us on the interweblogosphere have then taken it as read that a Nokia show-and-tell should happen by late 2011 – but I for one didn’t think that this reveal would happen right here in London! I know that the UK was going to be one of the first places to get the phones but not the unveiling!

Shortly after the Nokia Connection event in Singapore Nokia Tweeted: â€œSee you at #NokiaWorld in London October 26-27!â€.

I’ve just been pointed in the direction of nothing less than a dedicated Nokia World 2011 page which just so happens to confirm that the next major Nokia event will indeed be taking place on those dates here in the UK capital at ICC London ExCel.

Now add Stephen Elopâ€™s intention to â€œlaunchâ€ the first Windows Phone device this year, and to â€œship our product in volume in 2012â€ it certainly points to at least a couple Nokia Windows Phones hitting shelves in time for those Chirstmas lists 😉

It really does sound as though NokiaWorld London will be the place for the ‘official’ unveiling of Nokia’s new Windows Phone Mango devices – what do you reckon?