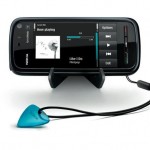 There’s a 3.2-megapixel dual flash camera with a Carl Zeiss lens, and 8GB of storage for your music that Nokia hopes you’ll be picking up from the new Comes With Music service.

The other musical bonus is that it’s packing some pretty potent speakers too!

One of the best bits is that you’re able to store your four favourite contacts, complete with photos, on the home screen storing your entire history with that person.

That means you can keep up-do-date with your fave 4 with all their texts, emails and calls exchanged as well as Facebook status updates through the RSS feed. That is pretty cool 🙂

The 5800 Tube is hooked up with Flash so you can browse “the whole internet”. I think that was a little attack on the iPhone………………

You’ll be able to grab this phone now for just 279 Euros on pay-as-you-go – another attack aimed squarely at the 3Gesus iPhone which will hurt your pocket for twice that.

T3 actually got their paws on one for a preview – here’s their thoughts:

The Tube 5800 is slim in thickness and in width, much smaller than the N96 which we were expecting it to be most similar to. It’s a candybar design, coated in a glossy piano black finish, with a bright red metallic strip around the edge. The front fascia is also glossy black, however the edges are encased in what looks like a transparent burgundy plastic.

There’s a slide-button on the right side of the phone, about three quarters down, which activates the screen. The screen itself is big – 3-inches, we’d say, so a tiny bit smaller than the iPhone’s screen. The touchscreen is fantastic though, hugely responsive, and the closest thing to the iPhone we’ve seen so far. It certainly eclipses the usability of recent touchscreens, like the Samsung Omnia and LG Renoir.

However, the downside of the touchscreen is that it’s still prone to fingerprint smears, even more so than the iPhone. The top right hand section of the phone has a touch-sensitive ‘XPRESS MEDIA’ written on it, and when pressed, launches the music player.

As aforementioned, Nokia’s first official touchscreen mobile phone will be compatible with their Comes With Music service, allowing users to download millions of tracks over a 12 month period, playable on the Tube.

It uses the Symbian S60 operating system, however the homepage looks different to other handsets, with an almost iPhone-esque array of icons. Sadly we didn’t get a proper chance to look through the entire menu, but it’s standard Nokia fare – so easy to use, even your granny will be wanting one.