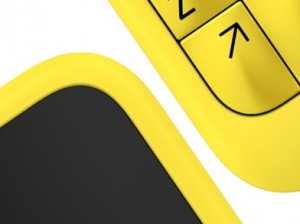 Nokia has revealed a glimpse of a new phone with a Qwerty keyboard, but it’s unlikely to be joining the Lumia smart phone stable.

The Finnish phone cobblers have released a mysterious teaser image which shows what appears to be a phone with bright Lumia-style colours but Asha-style keys.

The phone is decked out in the vibrant primary signature colours of Nokia’s Windows Phone-powered Lumia smart phone range, but it’s doubtful that there’ll be a Qwerty Lumia.

Chances are then that this will be a Nok feature phone, and possibly an Asha mobile.

Asha phones are Nokia’s wallet-friendly feature phones, which now feature basic apps but lack the power and features of a smart phone. They’re aimed largely at developing markets and their low-cost pay as you go customers.

Qwerty keyboards have mostly disappeared from smart phones as touchscreens become ubiquitous in our post-iPhone world.

Even BlackBerry is drifting away from its signature clicky keyboard, promoting the all-touchshcreen BlackBerry Z10 ahead of the forthcoming, keyboard-packing BlackBerry Q10.