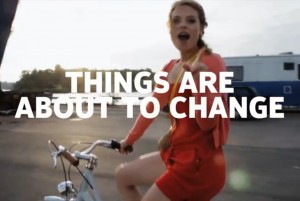 As you know, I’ve spent time with a Nokia 808 PureView and taken both pics and video using the 41-megapixel monster. Now, Nokia has released this new teaser with no product in sight… could the tease be what the vid was shot with?

“Things are about to change,”

Well so says the Nokia with its teaser for the company’s imminent launch event coming up on September 5th.

How do they tease? How else but to have some girl playing with her hair and making as many facial expressions at the camera whilst cycling down a dockside with ne’er a care in the world – best watch out for that forklift tru… oh….

So what on earth has 20seconds of video of some bint on a bike got to do with Nokia?

As far as I can see: nothing.

But, could it be that the video was recorded on a Windows Phone 8 Lumia handset, and that it could well have PureView camera technology?

Fair enough, the 720p version of the video is not as HD as I would expect, (check out my rough attempt taken when the Olympic Torch came through Walthamstow (and survived!) for some more PureView action), but that’s the only reason I can see for this clip.

Unless Nokia has started peddling (get it?) biker girls!

Am I as off track as our blonde friend in the video below? Let me know 🙂