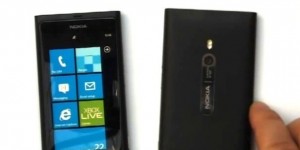 Pssssst! Wanna see what I’ve got? Don’t tell anyone as it’s a secret. Here’s the first picture of an actual to goodness Nokia Windows Phone – Stephen Elop aint gonna be happy!

The new phone, codenamed Sea Ray (not to be mistaken with the new Sony Ericsson Xperia ray) looks pretty much like the newly announced Nokia N9 which I think is gorgeous and have said so on the GN Facebook page. So there.

Like the N9 the Sea Ray is equipped with a Gorilla Glass touchscreen and a “pillow-shaped backing” – it kinda curves a bit I think.

The eagle-eyed amongst you may have already spotted that the the LED flash is in a different position when compared with the N9 and the Sea Ray is also sporting an extra button.

Could the flash repositioning mean that there’s a different sensor to the 8-megapixel unit found on the N9? Only time will tell I guess.

The whole super-secret thing about the new Nok is the fact that Nokia gaffer, Stephen Elop whipped the phone from his pocket during a presentation after calling for the audience to turn off cameras and recording devices before producing the “super-confidential” device, stressing he didn’t want to see it on the blogosphere.

Errrrrrrrm……….. sure Steve, we’ll not tell or take a crafty snap….

The Nokia Sea Ray was seen running Windows Phone Mango which is a good sign. Is this just a development handset or is this a working ready-for-sale item?

Either way – I hope that Nokia grows back to where it once was.