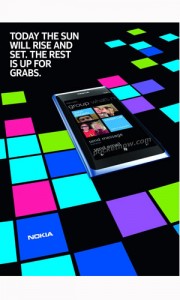 I’m actually looking forward to see what Nokia World has install but it appears that a cheeky little mobile has poked its nose through the curtain already – the little mischeif-maker in question is the Nokia 800 – otherwise known as the Sea Ray.

Nokia World lands in London in a couple of weeks but the Sea Ray looks like it has been renamed the Nokia 800 if the adverts are anything to go by. The first ad highlights how great the Windows Phone 7 Mango operating system is and how groovy the Sea Ray…. errr…. Nokia 800 is.

Or is the “Today the Sun will rise and set” phrase hinting that this is actually the rumoured Nokia Sun?

Anyhow, the second ad points out just how easy it is to do all those social networky things such as share photos and post updates.

I very much doubt that the Nokia 800 will be strutting its stuff alone at Nokia World. As well as Sea Ray and Sun here has been mention of Sabre, Ace and Lumia – so who knows?