Nokia Sea Ray Gets Named Lumia 800 Thanks to Leaked Photos 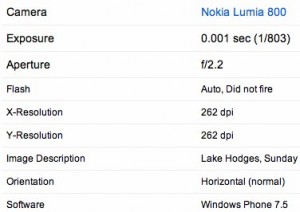 Ok, so there’s not long to the official Nokia unveileing but who doesn’t love to be ahead of the game? The much rumoured, and much leaked Nokia Sea Ray has been named Lumia 800.

Nokia’s first Windows Phone 7 Mango handset has had its moniker leaked thanks to some EXIF data.

To be honest the Nokia Lumia 800 sounds like a more plausible name for a Finnish handset that runs Mango…. Hmmm… ok, so Mango is still an odd name for an operating system. Don’t get me started with Google’s foody tags.

Saying that though, there was chat of the Nokia Sea Ray becomming its official title but, according to the Lumia name attached to a couple of snaps that were uploaded from a Windows Phone 7.5 device, it looks more-than-likely that Lumia 800 is to be the new Noks name.

Now…. what’s the Sabre going to be called?