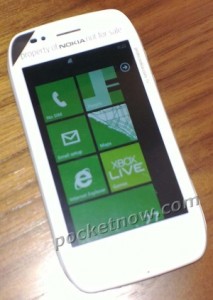 This here picture is purportedly a snap of Nokia’s upcoming Windows Phone – the Sabre.

Thanks to the ever present Mr/Ms/Miss/Mrs Blurry Cam we get to enjoy a sneaky peek at the Nokia Sabre running Microsoft’s Windows Phone Mango operating system.

Word is that the Sabre is equipped with a potent 1.4GHz processor in the engine room partnered with 1GB of RAM – that’s plenty enough for this Sabre to cut through browsing and app duties.

It appears that Nokia is going against the big screen trend as the Sabre is dancing out sporting a 3.5-incher – the same as the iPhone 4S. Which is fine but the Nok fails to match the Apple in the resolution stakes with 480×800-pixels. Bit of a shame that really.

Around the rear of the Sabre you’ll find a 5-megapixel camera – that’s plenty and may hint that this Nokia Windows Phone will be pointed at the lower end of the price lists. It has been said that the Nokia Sabre will cost around the €300-350 mark which would put it at £260-£300.

There’ll be more official news about Nokia’s new range of Windows-powered blowers next week. As well as finding out whether the leaked deets above are accurate about the Sabre there should be news of the Sun the much talked about Sea Ray – but til then, watch the rather noisy video below 🙂