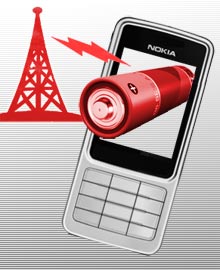 Some clever-clogs at Nokia have devised a cunning plan for a system that’ll charge phones using nothing more than ambient electromagnetic radiation – put simply: electricity from thin air!!!!

It actually is more plausible than I first thought.

You see, RFID tags are powered by electrical signals converted from electromagnetic waves emitted by a nearby sensor machine – yeah?

Well, that’s exactly how this system is said to work.

Nokia reckon that this tech won’t need a base stationâ€”it’ll draw from Wi-Fi, cell towers and TV antennae instead.

All sounds cool until the fact that the amount of electricity we’re talking about is very small.

Nokia hopes to harvest about 50 milliwattsâ€”not quite enough to sustain a phone, but enough to slow down the loss of charge through use and it’ll slowly charge a handset that’s been switched off.

Current prototypes only gather about 5 milliwatts, which is neither here nor there really.

Scientists and industry experts just can’t see the tech reaching the point that Nok wants it to for quite a while.

The Nokia white coats are still up-for-it though and say:

I would say it is possible to put this into a product within three to four years.

I think we’d all be grateful for anything that extends battery life – do you agree?