Nokia Phones Get Mobile TV Headset – Telly on Your Blower 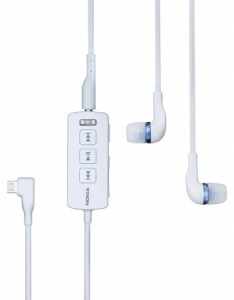 That’s right GadgetyNews Friends! Nokia’s new headset not only slings the typical track controls built into its cord it also adds a mobile TV tuner to your Nok blower as well!

So, Nokia Mobile TV headset is a TV tuner in a cord with integrated media controls which slips into your phoneâ€™s micro USB port.

Just download a Mobile TV app, which will either be pre-installed, or available through the Ovi Store, stick in your headphones and use those remote controls to channel hop.

It works with Symbian 3 phones that will play nice with such USB peripherals.

Before you start to write in to tell that you already get your telly fix thanks to SlingPlayer or TVCatchup – this Nokia tech wont gobble up your 3G data allowance or spank your battery so much.

Hold on to your wallets and purses though good people! The Nokia Mobile TV headset only works with DVB-H, which isnâ€™t yet used in the UK!

Where this is good news is that this shows how small DVB-T tuners are getting and that phones can perform such feats already – this means that getting your fix of the Gadget Show and Top Gear whilst on the move can only be round the corner!