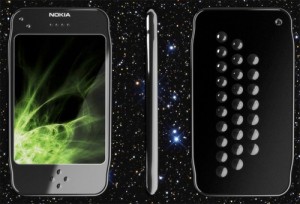 Cool idea but I found the large, bulky handset based on Nokia’s Series 60 platform less than enticing.

Well those phone futurists over at Recombu have decided that there’s a significant gap in the market for a gaming phone – hush all those that are screaming “what about the iPhone!?!”.

This slim ‘n’ sexy number is dubbed the Nokia Orion.

This concept is aimed at portable gamers that also want their handset to also be a mobile communications device without the clunky embarrassment.

There’s cool looking gaming controllers on the front teaming up with the almost expected touchscreen.

Round the rear you get a letterbox screen and full QWERTY pad.

Check out the vid.