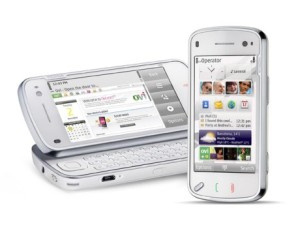 Although Nokia hasn’t actually officially announced a release date yet; as I’m so good to you folks that visitÂ hereÂ I thought I’d give you the heads-up should you be desperate to own Noks N97.

According to the online storeÂ Nokia’s latest top of the range flagship blower is going to land in the UK on 31 March forÂ the sim freeÂ sum of Â£479.99.

When it was launched back in December Nokia said that the phone would be due some time in the first half of 2009 “at an estimated retail price of 550 euros before taxes or subsidies” – whichÂ put it around Â£496.

Claiming the power of a desktop PC, the handset will offer a tactile touchscreen display, a QWERTY keyboard and personalised home screen as well as sport a 3.5-inch, 16 million colour, 640 pixel wide 16:9 widescreen display.

Memory-wiseÂ the Nokia N97 can handle up to 48GB of storage, including 32 GB of on-board memory, expandable with a 16GB microSD card.

If Play is correct then thatÂ means the N97Â will hit stores ahead of the proposed launch of the Palm PreÂ  in the UK.

Still no word from Nokia as yet.

Keep coming back for more news as I get it 😉