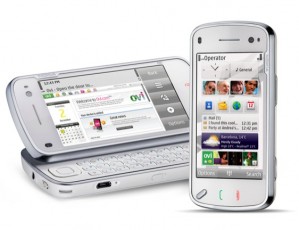 It seems that Nokia have slipped out details of the N97 whilst my back was turned!

Nok have also slipped a QWERTY keyboard into this sliding communicator that features an “always open” window to favourite internet or social networking site.

Nokia is calling the N97 the “world’s most advanced mobile computer.”

Well they have crammed in HSDPA, WiFi, and Bluetooth radios, A-GPS, a 3.5-mm headjack, 32GB of onboard memory with microSD expansion (for up to 48GB total capacity), and a battery capable of up to 1.5 days of continuous audio playback or 4.5-hours video.

As befits the N9* series it has that rather spanky 5 megapixel camera with Carl Zeiss glass and “DVD quality” video capture at 30fps.

It does read as being quite the special smartphone but will the S60 5th Edition OS can support it?

Also for that “mobile computer” claim it will have to drag the likes of me away from the simple and effective iPhone interweb browsing experience.

The N97 will launch early 2009 with a retail price set at around â‚¬550 – don’t forget to add on all those lovely taxes as well.