Nokia N96 Being Shipped To The UK 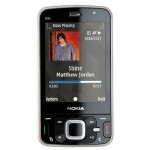 Nokia has finally announced that their much anticipated flagship (since February!) N96 has now started shipping so it’s likely to appear a month earlier than the previously thought October date.

If you need reminding it boasts a TV tuner, 5-megapixel camera with Carl Zeiss optics, turn-by-turn voice navigation, 16GB of internal memory that can be increased to 24GB with an optional microSD card, “superior sound and music”, N-Gage gaming and a 2.8-inch display.

Nokia says that first shipments of the device have started and it will be available with an estimated retail price of 550 euros (about Â£450) before taxes, subsidies and those other niceties.

In the UK, operators and retailers are due to be 3, Carphone Warehouse, Orange, Phones4U, T-Mobile and Vodafone.

You can order your own direct from Nokia. The store still offers it as a pre-order at the moment, but thatâ€™s likely because theyâ€™re clearing the backlog of existing orders before listing it properly.