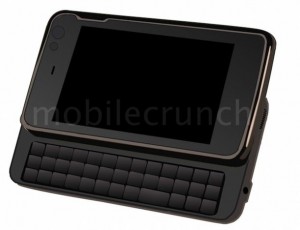 Nokia‘s next Internet Tablet, dubbed the “N900”, “Rover”, or “Maemo Flagship”, has apparently been leaked by an insider.

MobileCrunch seems to have the low-down on this new Nok device and is “very confident” on the info they’ve gathered.

Apparenly this handheld is in the same vein as the Nokia N810, but “significantly more polished”.

The new mini tablet (tabletlet?) is said to resemble the N97  in the looks department with a 800 x 480 resolution, 3.5 inch touchscreen above a slide-out QWERTY keyboard.

Running the Maemo operating system, the HSDPA N900 is said to offer GPS, an accelerometer, a 5 megapixel camera, Wi-Fi and 32GB memory expandable to 48GB.

MC are saying that the device is due to get a T-Mobile launch, with the US getting the phone in August/September and a European launch in October.

Here’s another piccy in the meantime: 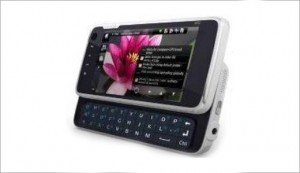