Nokia N900 Tablet is Real, Out and Official 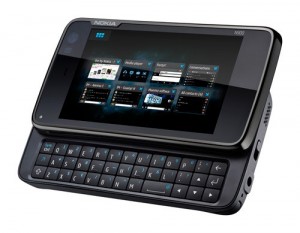 Here we go – no more rumours about the new Nokia N900.

It’s now official as Nokia has fessed up that it’s real and that the new tablet packs a Maemoâ€“powered OS that promises to be way more intuitive than the Symbian of old.

‘Mozilla-based’ browsing points to a taste of Fennec as well as well as an ample 32GB of storage that can be super-sized to 48GB via SD.

Under the hood it purrs along on an ARM processor which Nokia says will give the N900 PCâ€“like multitasking capabilities as well as â€œcomputerâ€“grade performance.â€ That I’d like to play with to see for myself 😉

You can hook it up via 10.2Mbps HSDPA and Wiâ€“Fi and the N900 gets Adobe Flash support and can take 10 email accounts for you schizos out there!

For the fingers there’s a touchscreen and QWERTY pad and round back there’s a 5MP camera.