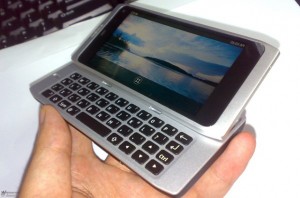 There has been plenty of chat about the constantly delayed N8 arriving in the UK but this is what I’ve been waiting for.

Say “Oooooer that looks rather tasty missus” to Nokia’s N9.

It appears to be packing MeeGo although sources say the aluminium cased Apple Mac Pro-esque design isnâ€™t quite it yet – but that it will be ready in the 8th week of 2010. So, just in time for your lists to Santa and coincidentally in-line with MeeGoâ€™s planned release.

Word on the street is that the metal mobile even has â€œProperty of Nokiaâ€ stamped inside the battery compartment. Those crazy Fins!

Moving over to MeeGo is quite a big deal for Nok as all their other smartphones have run on the Symbian OS. Symbian 3 should be busting out on the N8 but it does look like the N9 could well be the first to rock the Intel/Nokia open-source OS which was revealed at this year’s Mobile World Congress.