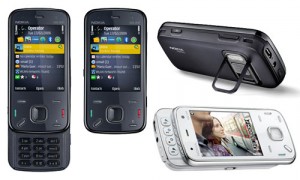 Nokia has stuck up their new Nokia N86 8MP on the Nokia Store for pre-order.

It’s due to launch at the same time (June 19th) as something called the iPhone 3GS and, unlike the iPhone, will be packing Nokia’s first 8 megapixel camera.

Through Nokia, the new Nseries handset will be priced at Â£399, sold on a handset-only, SIM-free basis.

Other features worthy of note are the pre-loaded Nokia Maps 3.0, the Ovi Store pre-loaded and an OLED display.