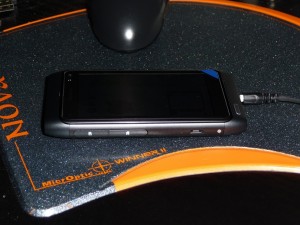 I’ve liked the Nokia’s that I’ve previously owned and it was only Apple’s iPhone 3G that dragged me away.

Now I’ve been allowed to live with Nokia’s N8 and I was looking forward to what they’ve managed to come up with since I left.

The N8 appeared in stores in October 2010 and I definitely liked the way it looked and the spec sheet seemed droolworthy.

N8 is loaded with Symbian^3 and brings with it multiple home screens, widgets and an improved UI.

Before I dig any deeper I have to say that the rather large but impressive box unfurled to present me with a very nice handset indeed. It feels good with its full metal chassis covered in anodised scratch-proof paint and makes the iPhone 4 feel a little bit like a toy.

It isn’t going to win any slimmer of the year titles though – especially wearing a 12MP camera with Xenon flash backpack.

That metal body is not for nosey-parkers either. You can’t remove the battery or get in the case without special ninja tools so Nokia has put two hinged flaps on the side of the N8 so you can get to the microSD card slot and the SIM card port. I think that’s a nice touch actually.

This N8 came loaded with a Three Mobile SIM and reception was great with no dropped calls or GPS confusion. Downloading and browsing was also decent speed-wise.

Internal memory is 16GB worth but that hot-swappable microSD card slot can handle up to 32GB of extra space.

Screen-wise you get a 3.5-inch capacitive OLED screen which is rather lush and the only other thing on the N8’s face is a single multi-function button. Tidy.

It took me a while to work out what the slider switch on this side of the Nokia N8 was for – it’s for locking and unlocking the phone. I prefer the front button and screen tap method which is also an option on the N8. Yup, you get physical and virtual lock/unlocking options here.

At the top edge of the N8 you’ll find a mini HD port and a 3.5mm headphone jack which will always win points with me. Oh, and this is where the power switch lives – as well as on/off duties it can also be pressed to quickly change profiles (Silent, Meeting, etc).

At the other end is the microUSB port and charger port.

If you’ve ever used a Nokia then you’ll recognise much of what you see. Symbian^3 doesn’t seem miles away from any other version I’ve used – it’s just I can touch the screen to get things done instead of using physical keys. 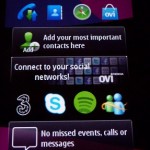 It’s not bad but after tinkering on the Android utilising Xperia X10 and iOS on my iPhone it just seems to lack Ooomph. On the N8 you get all of three displays to scroll through which can only play host to identically-sized widgets.

Flicking between those screens isn’t that seamless either – swipe your finger across and then wait and then it catches up. I found myself using the on-screen page selector at the bottom more often than not. On more than one occasion I confused the N8 and it restarted itself.

It’s not painful but I am here to be critical 😉

Pressing the button when the phone’s open takes you to the main menu and scrolling through the icons here seems to be a smoother operation for some reason. 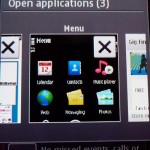 I do like the fact that N8 multi-tasks. You can see what’s working away in the background by pressing and holding that multi-function front button. The other neat thing is that if you tap the battery icon a little display pops up – the three new icons will show you all the connectivity options (Wi-Fi networks, USB, etc) and a clock which you can use to enter the alarm clock settings. Nice.

Thing is that the N8’s UI is no match for the likes of the iPhone’s intuitive user interface with its folders or the Live Wallpapers and nine home screen potential of Android. You could go and download some custom Symbian skins but how many phone owners actually will? Honestly? Really?

The cameras have always been impressive on N Series Noks and the N8 is no different. The 12MP sensor and Carl Zeiss optics matched with a Xenon flash states the N8’s intention.

Not only that but you can fiddle with a range of settings: contrast, sharpness, exposure or white balance. There’s a number of scenes to play with as well as decent face detection.

You have to pre-plan your snaps a little as there’s a bit of lag from pressing the camera button on the side of the N8 to the application opening. On the plus side the camera has a very good zoom which also works well in HD video recording mode.

One thing that the N8 has that the iPhone hasn’t though is Flash compatibility – so I strapped myself in ready for a full-fat webfest. 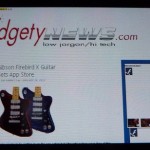 Web pages do appear fairly quickly (especially when hooked-up to WiFi) but pinch-zooming is not in the iPhone league. It’s a bit of a gamble and nowhere as smooth. The Nokia N8 uses Flash Lite 4 to interpret Flash 10 videos and plays nice with most vids. I did find that it struggled on occassion and get a tad pixellated at points but, more often than not, it sorted itself out.

The Nokia N8 is designed to be a media player and it deals with music, video and flicking through photos with ease.

Music through the rather nice bundled earphones (with a variety of fittings) was a little top heavy but with a little bass boost all was fine for the commute. If you want to share your selection then you’ll be glad of the phones FM transmitter. Any song will have an FM transmitter option in the settings, just set the frequency to whatever you like and the FM radio can pick it up. The N8 will sling the tune to the radio along with any info as long as RDS is enabled on the receiver.

Plenty-many video types are catered for and I reckon that you’ll be hard pushed to find a video file that wont play on the N8. Be safe in the knowledge that WMV, Xvid, DivX, MP4 and AVI files will all play without any bother. You can even download video from the BBC iPlayer.

Don’t forget about the bonus HDMI port so you can squirt everything to your telly and the Nokia N8 can play full Dolby 5.1 surround you know 😉

All this media chat would normally get you worried about battery life, especially as the N8 apparently only has a 1200mAh compared with most of similarly spec’ed phones rocking a 1500mAh power cell. I easily managed two days worth before having to juice it up. I must admit that I didn’t find myself hopping onto the interweb as much as I may have done if the experience were a little better.

As soon as I glanced over that anodised aluminium shell I wanted it – its battery stamina, going strong after being at it for two whole days was amazing.

Those specs – 12MP camera with Xenon flash, HD video recording with good sound recroding to boot, USB, HDMI output with 5.1 support as well as the OLED screen and I was almost sold.

As a media machine there’s little to knock. The camera is as I’d expect for stills and video recording is pretty darned fine too. As for playback; having a multitude of codecs that will run on the N8 along with Flash, well, that must be worth bonus points.

The only things that muddy the waters for me is that the user interface doesn’t seem to have caught up with its peers yet. I can look past the fact that you get a phone-style keyboard in portrait and only get handed the QWERTY version in landscape – the phone’s screens seem to look better in landscape anyhow.

If you like Symbian and have stuck with the Nok for years then you’ll appreciate the improvements. If you’re looking over the wall from Android or iOS then you might find it takes some getting used to – and you might even regret the move.