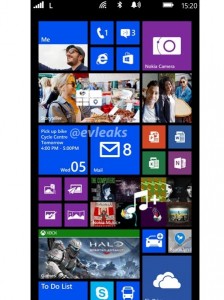 In the shadow of the Nokia take-over by Microsoft there’s more news about the Lumia 1520 that broke cover last week.

New photos of Microsoft’s new phablet, the Lumia 1520, which was previously called the Nokia Bandit, has popped up on the interwebs.

This photo was posted on Twitter by @evleaks, and is apparently a screenshot from the new Nokia 1520, which is said to feature a 6-inch full HD display.

Other rumored specifications on the Nokia Lumia 1520 include a quad core Qualcomm Snapdragon 800 processor and a 20 megapixel camera.

I’ll be keeping a close eye on developments, so keep coming back 🙂