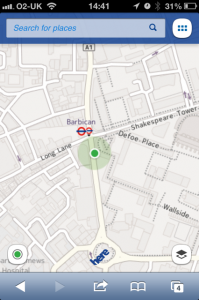 Nokia has joined Google in the battle against Apple Maps and have offered their own maps app to the iPad and iPhone, called ‘Here’.

Here is an iOS app and website that you can edit and will point you in the right direction whether you have a Nokia or not.

Nokia has already got a great track record for mapping. Nokia Maps and Nokia Drive are excellent on the Lumia line of Windows Phone, and the Finnish company also provides location data to four out of every five car sat-nav systems including Garmin and many more.

Here maps can now be found at Here.net for anyone to access, and will appear on the iPad and iPhone as an app.

Android phone owners access maps through their phone’s Web browser for now, while an Android SDK is set to appear next year.

Here be Favourites and updates

Maps are based on HTML5 and feature voice-guided walking directions and real-time public transport information – unlike Apple’s cheeky linking to other apps that provide that service.

You can search maps and save your favourite locations, and if mapping information is out of date you can add roads, tunnels, bridges and other places. That sounds ripe for some annoying april Fools pranks 😉

If you need to find your way in a foreign country or anywhere else without a data signal then you can save the map on your phone and look at it without a signal. These offline maps can zoom in up to four levels.

The Android and Windows Phone versions of Here will work offline, but the iOS version requires a data connection.

Here will also feature a 3D view. Nokia has snapped up a company called Earthmine for their 3D know-how so there’ll be more three-dimensional goodness to come.

There’ll also be a version of Here Maps for Firefox OS next year. Firefox OS is a new open source operating system for mobile phones that will make its debut next week.

Here will be found in Apple’s App Store “in the coming weeks”.