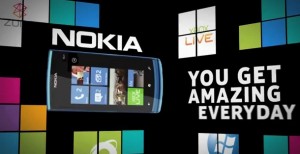 The Nokia to replace the Lumia 800 as top of the heap has been spotted in a above video – imaginatively named the Nokia Lumia 900.

The not-so-subtle ‘leak’ has been used to temp developers to work their magic with the Windows Phone operating system.

You and I know that the amount of decent apps can be the difference between flavour of the month and a phone fail flop.

The ad invites app developers to “dive in” to Windows Phone, a “dynamic new platform” offering “local training and support” and “world-class dev tools” and, should you need more Hollywood endings: “Today the sun will rise and set — everything else is up for grabs.“

Nokia has already hinted that there will soon be a new flagship phone and, if the rumours are true, the Lumia 900 (a.k.a Ace) will land sporting a 4.3-inch display, 8MP camera all powered by a 1.4GHz single core processor and housed in that curvy body you see before you.

The Lumia range also includes the Nokia Lumia 710 at the more wallet-friendly end of the Windows Phone Mango spectrum.

If you are still faithful to Symbian then you may be excited to hear that Nokia has revealed details of the next updates to the operating system. Carla will follow the current version, Belle, and will include Dolby sound, NFC, and an updated browser. Donna will then follow, supporting dual-core phones. So – there you go.