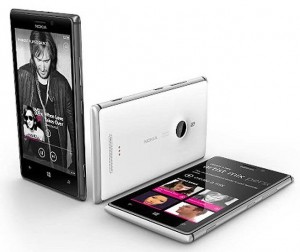 The Nokia Lumia 925 is available in the UK now. The new flagship Windows Phone 8 smartphone from Nokia lands in different colours at different networks and shops throughout this week. Read on for more details, Gadgety faithful.

The Nokia Lumia 925 is a departure from the previous Lumias and their brightly coloured cases and instead opts for a classier monochrome cladding.

The 32GB black version is exclusively sold by Vodafone at first, while the white 16GB model is only sold by O2 for now.

Three, EE, Phones4u, and Carphone Warehouse and other outlets will sell the 925 later this month.

The 925 is the first Lumia with metal in the design. A metal band encases the polycarbonate plastic back, which can be swapped for yellow and red options – if you really do need that colour injection.

A wireless charging cover can be clipped onto the back instead, so you can charge your phone without plugging in a cable.

The new Lumia showcases Nokia’s Smart Camera mode, which captures ten images in one go, so you can quickly pick the best snap or edit out stuff from the picture.

Smart Camera mode will come to all Lumia Windows Phone 8 smartphones soon as part of a forthcoming software update.

The Lumia 925 is due to go on sale today but, if not, Nokia says it’s defintely expected to hit shelves this week for around £500 SIM-free or for £34 a month.