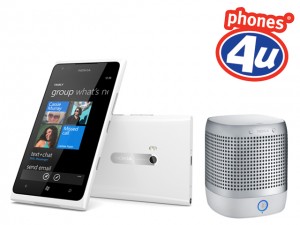 Looking for something a bit more than a Nokia Lumia 800 and, ideally, in white? Good news then phone hunter, for the Nokia Lumia 900 is heading into UK shops on April 27th and Phones4u are all set to exclusively offer the white version of the Windows Phone-powered smartphone.

The flagship Nokia Windows Phone and larger sibling to the Lumia 800 will be landing in the United Kingdom at the end of the month but, should you not fancy queuing up you can pre-order the 4.3-inch Lumia 900 today.

The front-facing camera has been upgraded from previous Lumia handsets to a one-megapixel high-definition snapper.

If you want to get your hands on the Lumia 900 for free then you’ll be signing up to a 24 month contract and spending £36 per month for the honour.

That will put you on to an O2 tarriff complete with 300 minutes, unlimited texts and 1GB of data.

Carphone Warehouse is also confirmed to be selling the Lumia 900 in shops or online, though currently its product page just lets you register for updates.

Phones4u not only has exclusive dibs on the white Lumia 900 they’ll even sweeten the deal by chucking in a Nokia 360 Play wireless speaker that can pair with the 900 using NFC.

The Lumia 900 is a good looking phone and should sway many folk to head over to Windows – just as long as the UK version doesn’t fall foul of the issues hitting the US-accented smarty.

Three days after the official US launch of the Lumia 900 Nokia had to announce that there was a problem with memory management which could, in some cases, lead to a loss of internet connection.

“This issue is purely in the phone software and is not related to either phone hardware or the network itself,” said Jo Harlow, head of smart devices at Nokia, and Chris Weber, its US chief, in a joint statement.

Nokia said there would be a solution to the problem by April 21 and that everyone who has purchased a Lumia 900 before the bug is fixed will receive a $100 credit to their AT&T bill from Nokia.

Perhaps we’ll be safe as the UK wont get that swish 4G tech in the Brit Lumia 900.

I like the design, I like the look of Windows Phone Mango but it still falls behind in the app wars – iOS and Android both have a lot more and some of the Windows apps are a touch more expensive.

Are you tempted? Do you already rock a Lumia 800?