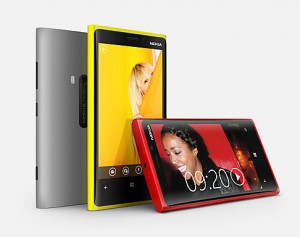 Nokia has unveiled the Nokia Lumia 920, which means that it is all set to be the first Windows Phone 8 phones to hit the stores. The rumours were true – it also packs a PureView camera as well as wireless charging.

Is the Nokia Lumia 920 the answer to all those calls for the PureView tech of the 808 to be squeezed in to a slender Windows Phone 8 handset though?

The Lumia 920 is equipped with a 4.5-inch high definition curved glass screen which will automagically adjust colour and brightness according to how bright its surroundings are.

The 920 has a neat trick in the battery department too – when it needs some go-juice just plonk it on to its charging pillow to recharge. No need to search for that cable, it’s wireless!

What you really want to know about though is that PureView camera technology, based on the Nokia 808 PureView, isn’t it?

The Nokia 920 does indeed feature PureView technology which Jo Harlow, head of Nokia’s mobile phones business, states will capture five to ten times more light than any competitors’ smartphone cameras thanks to its “floating lens technology that surpasses the optical image stabilisation system of most digital SLRs.”

“The technology reacts to the minute movements in your hand to balance the lens, so the shutter can stay open longer, and more light means brighter, clearer images without flash, even indoors and at night,” Harlow said. “The Nokia Lumia 920 also replaces your HD camcorder because another benefit of this floating lens technology is that the lens is stabilised for taking smooth and professional-looking video.”

The Lumia 920 will run a 1.5GHz, dual-core Qualcomm Snapdragon S4 processor and features a 2000mAh battery, which Harlow said is the largest battery Nokia has ever installed in a smartphone.

There’s 1GB of RAM, and 32GB of memory on board, along with 7GB of free SkyDrive cloud storage.

Combined with Windows Phone 8, Harlow said the Lumia 920 will provide the “fastest and most responsive smartphone user experience there is while being up to 30 per cent more battery efficient than quad-core alternatives.”

Built-in apps include indoor maps, and a sat-nav which tells you how long your commute will take.

Nokia also showed off the natty looking City Lens – an augmented reality app that shows you information about the shops and bars on any street you point the camera at.

In addition, Nokia Lumia 920 recharging plates will be installed in the Virgin Atlantic clubhouse at London Heathrow Airport.

These are the first Windows Phone 8 phones to actually appear in the flesh so it will be interesting to see what HTC and the rest have to offer in reply.