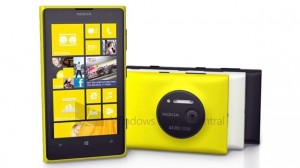 The Nokia Lumia 1020 has broken free ahead of its official unleashing later this week.

The new Nokia, previously known as the EOS, was renamed after the 1020 tag first emerged on Monday after leaked EXIF data appeared on Flickr.

The Windows Phone 8 device is rumoured to feature a PureView 41-megapixel camera and, as these leaked renders show, will more than likely arrive in  yellow, white and black versions.

According to information leaked to Windows Phone Central, the handset will also ship with built-in optical image stablisation, 2GB of RAM and 32GB of internal storage.

It also claimed it will have an F2.2 lens. Interestingly, that is the same as the EXIF data that appeared on Monday.

Other information reported by Windows Phone Central include that the phone will feature a Xenon flash.