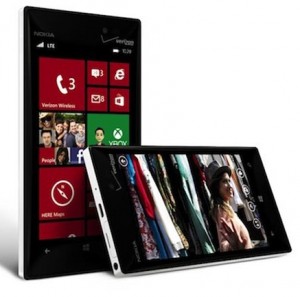 After numerous teasers Nokia has finally officially announced the Nokia Lumia 928 smartphone along with the full specifications of the handset.

The Nokia Lumia 928 is a Windows Phone 8 handset, and features the company’s PureView camera technology, in the form of an 8.7 megapixel sensor, Optical Image Stabilization (OIS), which makes it easy to capture blur-free pictures and videos in low-light. Along with OIS, the Nokia Lumia 928 features a Carl Zeiss f/2.0 lens matched with a xenon flash.

To match the fancy optics, Nokia has loaded the Lumia 928 with three high-audio-amplitude-capture microphones to make sure you can capture high-end, distortion-free audio even in the noisiest environments.

Naturally, the 928 is rocking the wireless with NFC (Near Field Communication) and wireless charging where you just have to plonk the new Nok on a charging pillow, pad or speaker that packs the special tech.

Nokia announced the Lumia 928 at the weekend for Verizon Wireless, and they are holding a press event in London tomorrow so I’m expecting them to announce the international version of the handset and, more importantly, the price.

The Nokia Lumia 928 will launch on Verizon Wireless this Thursday the 16th of May, the handset will be available for $99 after a $50 mail in rebate, plus you will also get a $25 credit towards Windows Phone apps.

Do you fancy one if/when they land in the UK?