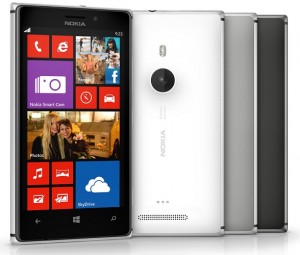 The Nokia Lumia 925 has just been officially announced in London, and O2 and Vodafone are quickest off the mark to confirm they will sell the new Windows Phone flagship – with a different exclusive colour apiece.

The UK version of the Lumia 928, which launched this week in the US, the 925 will land in Britain in June.

The 925 comes in black, white or grey metal. O2 is the only network to sell the white version when it launches, and Vodafone will exclusively sell the black model.

The Windows Phone 8 handset is clad in an aluminium chassis. The Lumia 925 is 8.5mm thick and at 139 grams is lighter than the Lumia 920 released last year.

The Lumia 925 packs in a 1.5 GHz dual-core Snapdragon processor along with 1GB of RAM, plus 16GB of internal storage and a curved 4.5in, 1280×768 AMOLED display with Nokia’s ClearBlack technology.

Round the back there’s a polycarbonate shell with contact points for an optional wireless charging case, while an iPhone-style metal surround houses the antenna.

Along with the usual optical image stabilisation, Carl Zeiss optics and dual LED flash, the Lumia 925 will be the first of Nokia’s phones to feature the Smart Camera app.

Smart Camera snaps a sequence of ten 5MP images, letting you tweak the resulting image with a selection of shooting modes.

Best Shot suggests which of the 10 frames taken resulted in the best overall image.

Action Shot superimposes all the aforementioned group of frames on top of each other to create a very pro looking sequence of images, letting you add, remove and fade individual frames as you wish.

Change Faces lets you individually choose which face is the best for each person pictured, and superimpose them on the image.

Finally, Remove Moving Objects – guess what that does? Yup, it allows you to filter out unwanted moving objects from the image.

Smart Camera won’t be exclusive to the Lumia 925, though – Nokia will roll the app out across the entire Lumia range in a firmware update called Nokia Lumia Amber, which will be available from summer.

The Nokia Lumia 925 will be available from June 13th, with Vodafone carrying an exclusive 32GB model, while O2 is the only one packing the white variant; Three will also be carrying the Lumia 925. Pricing starts at €470 (£400).