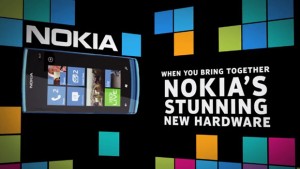 Impressed by the Nokia Lumia 800? It is a very nice phone isn’t it? Well, that will soon become the mid-range offering in Nokia’s brand new Lumia Windows Phone range as the 900 is set to appear very soon.

That’s the word according to a recent tweet from Swisscom.

It appears that the very helpful communication’s network from the land of lonely goatherds let the information slip when responding to tweet from a customer asking about the Nokia Lumia 800. Apparently the Lumia 900 will be landing in Europe in February!

This means that Nokia’s release plan is that the Lumia 800 will drop in Europe in January with the 900 following in February making its claim as the new flagship Windows Phone from Nokia.

Of course, we lucky Brits can already own the Lumia 800 🙂

So, what can we expect from the Lumia 900? Well, if the rumours are true we will get a 4.3-inch screen, 1.4GHz processor and 8-megapixel camera. It could also bring with it the next generation of Windows Phone software, provisionally titled Tango.

The Lumia 710, announced alongside the Lumia 800 earlier this year, will soon be joining its WinPho Mango buddies on the shelves and is placed as the more affordable model of the trio.

On the subject of price – O2 baulked at the RRP of the 800 so I wonder if the range will get a pricing restructure when the 900 lands.

I’d expect the Nokia Lumia 900 to say hi at CES on the other side of the New Years celebrations.