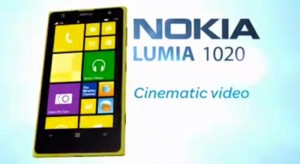 In just a few hours Nokia will unveil their latest flagship smartphone, the Nokia Lumia 1020. I know this for definite thanks to AT&T leaking a video.

OK, so we all already know what the Nokia Lumia 1020 looks like and also what the handset’s specifications are thanks to all the leaks on the interwebs ahead of its official launch.

The rumoured 41-megapixel camera appears to have been confirmed and details that the phone will have a 4.5-inch AMOLED HD+ display with a resolution of 1280×768 seem to be nailed on. The screen itself will be made of Gorilla Glass 3.

Internally, the new Nokia phone will have a 1.5GHz dual-core processor along with 2GB of RAM and 32GB of on-board storage. The Lumia 1020 will also come with 7GB of SkyDrive storage.

All of that has been pulled together by US mobile carrier AT&T confirming the Nokia Lumia 1020 before it is officially unveiled by posting a video of the handset to their YouTube account.

The video has now been made private by AT&T, but the folks over at Engadget managed to capture it, and you can see the video at the link below.

The Nokia Lumia 1020 will be officially unveiled in New York at around 4pm UK time.