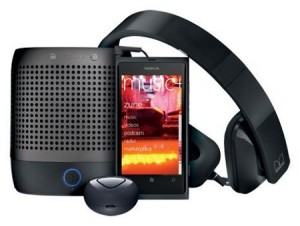 The Nokia Lumia 800 Windows phone has certainly attracted a lot of new fans to the Finnish phone cobbler and now they have released the Entertainment Bundle to make the deal even sweeter.

Nokia recently released the Nokia Lumia 800 in white but now they’ve unveiled their Entertainment Bundle which is set to be officially displayed from February 26th onwards.

The Nokia Lumia 800 Entertainment Bundle is packed with gadgety goodness – wanna see what it’s got in the box?

Obviously, you get the much acclaimed Nokia Lumia 800 smartphone. On top of that your ears will thank you for the provision of the Nokia Purity HD Stereo Headset by Monster.

That’s all very well and good but what happens if you want to go hands-free? How would a Nokia Luna Bluetooth Headset suit you? Well, just as well that Nokia have thrown one in with this bundle then isn’t it?

I know that you are a generous and sharing kinda person – and so does Nok, so they have included a Nokia Play 360° speaker so that all your friends can benefit from your impeccible music taste.

Amazingly, the Lumia 800 supplied in this entertaining bundle is unlocked so you can shove the SIM in from your favoured supplier.

The contractless Entertainment Bundle costs $899 and you get the choice of two colour-coordinated collections – one follows Henry Ford’s ‘just black’ ethos, while the other includes a white Play 360° speaker mated with the remaining gadgets of vibrant magenta.

Being unlocked I’m taking it that you could order a bundle to be delivered in the UK.