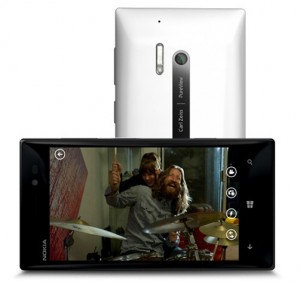 Yesterday a video was released by Nokia comparing the camera on the Nokia Lumia 928 to the iPhone 5 and the Samsung Galaxy S III, and whilst the handset has still not been officially announced Nokia has released another teaser video showing its audio recording skills.

In a video posted on its U.S. website, Nokia pits “the Nokia Lumia” against the Samsung Galaxy S III and iPhone 5.

The high-end smartphones do battle amongst a whir of a roller coaster noise and heavy beat choonz. The flick aims to show the Nokia device’s dominance in low light and OIS photography.

Compared to the iPhone 5, Nokia’s contender seems to have greater colour saturation and sharper image focus, while the S III is dogged by greater noise.

The latest Nokia Lumia 928 video shows off the audio recording capabilities of the device.

According to Nokia, the handset will offer ‘best in class audio’ and features a new high performance digital microphone.

The Nokia Lumia 928 is rumored to feature a 4.5-inch Super AMOLED display with a HD resolution of 1280 x 768 pixels, and processing will come from a dual core Qualcomm Snapdragon S4 processor clocked at 1.5GHz.

Nokia still hasn’t officially announced the Nokia Lumia 928, so this is possibly the worst kept secret – ever!